Why Is Dog Food From China Bad?

All of these are serious questions that need answering, especially due to the number of lawsuits and cases involving pet deaths from imported dog food. We shed a light on what’s really going on in China’s dog food production, and how you can keep your dog food clean and pup healthy.

Why Do We Get Food From China? 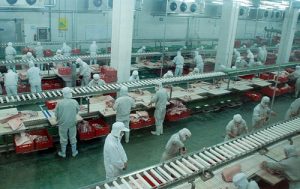 The first question that comes to mind when discussing the dangers of pet food from China is usually, “Why do we even import it at all?”

The reason is twofold. The amount of leftover waste from poultry production, in particular, has fueled the idea of turning it into pet feed. China produces, consumes, and exports a high amount of chicken meat, and the leftovers (also what we call “by-products” like feet, tendons, organs, anything not packed and sold, etc…) become waste if they aren’t used. Since this waste wouldn’t be used otherwise, pet food companies have decided to use it as a cheaper option to produce their dog food instead of purchasing premium home-grown chickens in the U.S.

The second reason is due to production and labor costs. In the same way that it’s cheaper for technology companies to have phones, computers, and other high-end technologies in China, it’s also cheaper for pet food companies to pay to produce in China. Not to mention, China is also a major producer of Vitamin C and other vitamins that are common additions into pet foods, making those cheaper to add-in in the country.

While both of these reasons sound logical on the surface, we have to keep in mind the quality of the products being produced in China. For instance, most Vitamin C manufactured in China is from genetically modified corn (which is also cheaper to produce) whose long-term effects are unknown.

Along with this, even human food products like honey have become a major issue. The FDA has discovered China using illegal antibiotics in honey they export to the U.S. to stave off bacterial infections which then get transferred to consumers. A majority of this honey is also stored in lead drums, allowing the lead to potentially leech into the honey.

As you can see, simple feed production in China has its dangers before we even consider quality. If this is the low level of care being put into human products, imagine what’s put into pet food?

Where Do The Issues Come From? 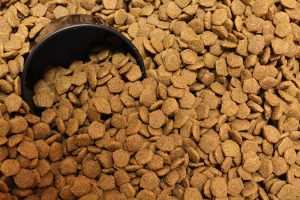 The main issue with dog food from China is the threat of contamination with chemicals and other toxic substances. For years there have been reports, studies, and recalls on dog food and treats being imported due to containing dangerous industrial chemicals that could cause sickness or even death in pets. These substances slip into dog food production either due to lax controls around manufacture (more on that below) or are added as cheap preservatives or bulking agents.

These are just some of those toxic ingredients:

The FDA has found on occasion trace amounts of antibiotics in dog food from China, especially those using chicken as their meat source. When the chickens are given antibiotics, small amounts can end up in their meat and transfer into the dog food they are added too. It also doesn’t help that many of the antibiotics that are banned for use in poultry in the U.S. are also used freely in China, adding another layer of potential danger.

In 2007, a major recall of many dog and pet food brands occurred in the U.S., Europe, and South Africa due to hundreds of cases of kidney failure in pets, many resulting in deaths. An FDA investigation discovered these were the result of the industrial chemical melamine making its way into a pet food brand that originated in China.

Melamine is an industrial chemical used in the production of laminates, flame retardants, molding, plastics, and even dinnerware, and is in no way fit for animal or human consumption (as the cases of kidney failure showed). It can be added to dog food to boost the protein readings (making it appear that there’s more protein than there really is) which has led to theories that it may have been intentionally added. The proteins it was found under in the 2007 recall were labeled under wheat gluten and rice bran concentrate.

While melamine was recalled and the government does test protein for traces of it, the past recalls do highlight the potential danger of trying out dog food from China.

Propylene glycol is a chemical used in the production of antifreeze. Dog food brands have been known to add it to wet foods liked canned varieties in order to preserve the moisture content. While the FDA does approve of its use, studies have shown adverse effects like seizures, nervous system toxicity, agitation, and cardiac arrhythmia.

Mycotoxins are toxic by-products that occur from mold metabolism in grains found in dog food, such as corn, wheat, rye, and barley. Studies show that they are highly toxic, causing anything from mild sickness to cancer and even death. Results from samples from pet foods from China show 96 percent were contaminated with mycotoxins; many of which exceeded the maximum limits set by the EU.

Cyanuric acid is a chemical often used in herbicides and disinfectants. It was discovered in pet food as part of the 2007 melamine recall and was thought to have made the toxic effects of melamine worse. This is because while cyanuric acid is considered non-toxic on its own, in combination with melamine it can form dangerous crystals in the kidneys, leading to damage. 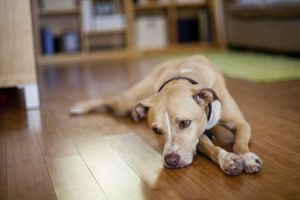 There are many signs your pooch may have eaten contaminated food, ranging from a few hours of lethargy (possibly due to a tummy ache) to more serious complications like tremors or hives. Some of the most common symptoms to look out for are:

If your dog is experiencing any of these symptoms, recall if you recently switched up their dog food or started feeding a new brand of treats.

How Is Their Production Going Wrong? 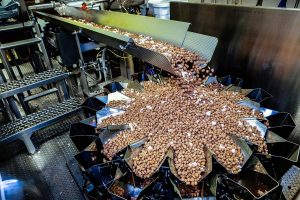 Before 2018, China had virtually no defined regulations on pet food products. Export on food products only specified raw materials that were “fit for human consumption.” As of now, new regulations under China’s Ministry of Agriculture and Rural Affairs (MARA) have been put into place in an effort to save the reputation of China’s pet food production and help prevent future recalls. It contains new regulations governing hygiene that contain limits on inorganic compounds, chemicals, and mycotoxins.

The regulations also specify that manufacturers now need to obtain a Feed Production License, and must comply with certain labeling regulations on manufactured products that are more strict on ingredient classification and claims.

However, even with new regulations, a common complaint in the past is that regulations aren’t enforced, or that consequences often aren’t enough to deter companies from unethical practices. These new regulations do contain added penalties, although how strictly they will be enforced remains a question. Also, these are fairly new regulations having only been added as of last year, so time will tell as to whether they make a real difference in pet food quality.

Another huge factor affecting pet food quality from China is environmental pollution. Severe air pollution impacts China’s major cities and is already causing major health problems in humans. It’s no stretch to apply these health effects to animals, who may be even more exposed to the environment by being in contact with drainage water and outdoor air. The same goes for crops in the region that are grown in polluted conditions. All of these products being added to pet food, with whatever negative effects chemicals and other pollutants have had upon them.

How Can I Avoid Dog Food From China?

Considering the not-so-pleasant aspects of dog food from China, it’s obvious we’d all like to know how to avoid it. Some pet stores have even pulled brands manufactured in China from their shelves due to controversy; however, this doesn’t mean the dog foods they are carrying don’t contain ingredients from China. For instance, a brand could be labeled, ‘Made in the USA,” but still contain ingredients sourced from China.

Following the advice below on how to avoid anything China in your pup’s food will be your best bet to be sure about a brand’s ingredients.

One of the best things you can do to avoid dog food from China is to look for brands that source and produce locally. Many high-quality brands will offer up this information on their website, making it relatively easy to find out. If you can’t find whether the ingredients were produced locally, or perhaps the website isn’t clear that all ingredients are local, contact them directly by phone.

Also consider that if a brand contains added vitamins and minerals, it’s possible those were sourced from another country like China.

This is one of the best ways to ensure you’re getting dog food free from ingredients from China. Human-grade ingredients are simply whole ingredients like meat (make sure the meat is “labeled,” aka: “chicken,” beef,” “turkey,” etc…), veggies, fruits, and some whole grains (it’s best to avoid corn, wheat, and soy because most in the U.S. is genetically modified).

Searching for human-grade ingredients ensures the brand doesn’t contain meat by-products, which can be anything from scraps from euthanized animals to roadkill. These can also contain resides harmful bacteria or diseases, adding another layer of potential trouble.

Make your own dog food

Putting together your pooch’s meal yourself with fresh, raw ingredients is another great way to avoid any contact with dog food from China. Don’t worry, it’s easier than it sounds! We have a guide that shows you how to make your own dog food, plus whip up homemade treats like sweet potato and apple treats and even dog treats to help with skin allergies. Check them out here.

Look for food without chemicals, additives, or other vaguely labeled ingredients

If you’re seeing chemical names or other vaguely listed ingredients like “meat” on a dog food brand, it’s best to skip it. When ingredient labels are unclear, it can suggest something hidden within that ingredient, such as meat by-products being hidden under the term “meat.” Instead, look for specific labels that are of real food, like “chicken,” “turkey,” “salmon,” or other named meats. 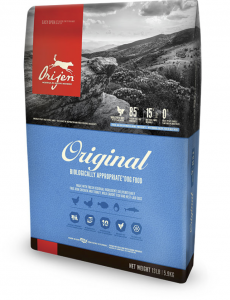 You don’t have to worry about toxic ingredients in Orijen’s dog food line, much less ingredients from China. Orijen is made with 75 to 80 percent meat, and all ingredients are local and regional. They pride themselves on using cage-free poultry, nest-laid eggs, ranch-raised meats, and wild-caught fish; all ingredients fit for human consumption. 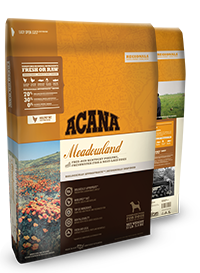 Acana has a “regional mission” of making sure all of their dog food ingredients are fresh and local. According to their site, this process is “Unmatched by any pet food maker, our ingredients arrive at our kitchens fresh, bursting with goodness, and typically within 48 hours from when they were harvested.” These special ingredients include ranch-raised red meats, free-run poultry and eggs, wild-caught fish, whole fruits and vegetables, and locally grown botanicals. 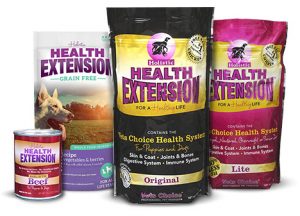 Health Extension states all of their ingredients are proudly made in the USA. Each ingredient is also of high quality, with the first ingredient being organic chicken in many of their formulations. They also don’t contain by-products, gluten, wheat, corn, soy, or any artificial flavors, colors, or preservatives. 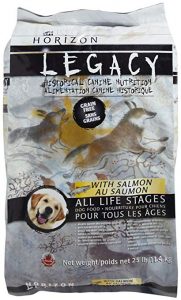 Horizon dog food is another brand that sources their ingredients locally and manufactures at their own plant in Canada. They state their formulas are “meat dense,” meaning heavy on the meat-based protein, and contain no GMOs, growth hormones, steroids, by-products, artificial flavors, or chemical preservatives.

Below is a list of brands reviewed in this article