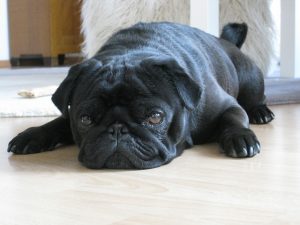 One of the worst parts of having a dog is undoubtedly cleaning up after it. Obviously, this is unavoidable, but there are some things that can make this task worse, one of which is gastrointestinal issues. Dogs love to eat things that they shouldn’t; however, this might not be the only cause of your dog’s tummy trouble. Some dogs do also suffer from allergies. Unfortunately, for the most part, allergies can’t be cured, but they are easily manageable. Let’s get into it.

An Introduction To Allergies

Most people have heard of an allergy even if they don’t have any firsthand experience with them. They have the same cause regardless of the species or the manifestation. An allergic reaction happens when the immune system overreacts to a trigger of some sort. The trigger itself can be ingested or simply within the environment. Dogs can be allergic to environmental factors or foods too. The symptoms of an allergy are often again similar between humans and dogs; they tend to manifest in rashes or inflammation on the skin, a general agitation, restlessness or even a pain response, and gastrointestinal issues like vomiting, diarrhea or even constipation.

When To Take Your Dog To See A Vet

Realistically, if you see any of the above-mentioned symptoms, then a trip to the vet could be advisable. However, it often depends on the severity and longevity of the symptoms too. In some instances, home remedies can be used to alleviate the symptoms; for example, this advice from Native Pet details how you can deal with your dog’s constipation. The symptoms mentioned above also aren’t exclusive to an allergy which can therefore make it more difficult too. In the end, you know your dog; if you suspect that there is something wrong with them, be it an allergy or something else entirely, for your own peace of mind taking them to the vet is recommended.

How Allergies Are Diagnosed In A Dog

Diagnosing a dog with anything can be tricky because, unlike humans, they cannot communicate their symptoms to the vet. This is why tests and examinations are so important. Once an allergy is suspected, the diagnostic process among dogs – or any animal, really – is pretty similar to that of humans. It often begins with an elimination diet, whereby their diet is stripped right back to basics. Over time, you then re-add other food back into their diet; if the symptoms appear again after the reintroduction of a certain food, then you have found your allergen.

If an elimination diet doesn’t work, or if the allergy is suspected to be environmental, then your vet might suggest a blood test. However, these are often more expensive, which is why they tend to be a second resort unless, of course, you or your pet insurance can afford them out of pocket. The blood sample is tested against all of their possible allergens to see whether or not they create a reaction. Some things that might present as an allergy could be the result of inflammation, like IBS. The diagnostic process might take some time, but you will eventually get your answer.

The Next Steps After Diagnosis

As mentioned above, allergies are not curable; it is more about avoiding the allergens and managing symptoms. After the allergen has been discovered through the tests, you can simply rework their diet or lifestyle to avoid whatever it is. Nothing else really has to change, you can modify their diet so that they are no longer ingesting the allergen, or if they are allergic to something like dust or pollen, then you can clean the house more or change their walk schedule to avoid the high pollen times of the day. Sometimes it is worth seeing a specialist if their allergen is really common or otherwise hard to avoid so that they can help you to come up with the necessary plan of action. There is also a range of hypoallergenic dog foods and treats that you could try. Lastly, it is also worth considering the symptoms of the allergy and how it manifests. Sometimes things like a special shampoo or other medications akin to an antihistamine can also be beneficial to incorporate into your dog’s routine, especially if the allergen is harder to avoid entirely.

Unfortunately, just as an allergy cannot be cured, they also cannot be prevented either. They most commonly present in infancy or childhood, but they can also occur randomly throughout your dog’s life. If your dog has developed an allergy, you are not to blame; these things happen it isn’t anyone’s fault. Luckily, allergies are pretty easy to deal with once they have been identified, of course. If you suspect an allergy, then you should make an appointment with your vet to discuss the necessary next steps.