Over the centuries the Buhund was used as an all-purpose farm dog in Norway. Even today he can be found on remote farms doing various jobs, including herding cattle and sheep; and performing his duties as a watchdog.

The number of Buhunds declined in Norway in the early 1900s as other breeds were brought into the country. The simple farm dog was not thought of as a “show dog”, or considered anything special until fanciers began to appreciate the breed. Buhunds were first exhibited at a dog show in Norway in 1920. The first club was founded in 1939. There are more Norwegian Buhunds today in Norway than in other countries, but the breed is accepted by all major kennel clubs. They were recognized by the American Kennel Club in 2009 as a member of the Herding group. Today the Norwegian Buhund is the 174th most popular breed registered with the AKC.

The Buhund is closely related to the Icelandic Sheepdog and the Jämthund or Swedish Elkhound/Moosehound.

We couldn’t find many health issues associated with the Norwegian Buhund; the breed seems to be extremely healthy.

Hip dysplasia does occur, but not with great frequency. We recommend that you not overfeed your Norwegian Buhund, especially as a puppy. Being overweight increases the risk of hip dysplasia and arthritis in the future, even if a dog’s parents had good hips. Buhunds are generally such active dogs it’s unlikely that many of them would become overweight.

Hereditary cataracts can occur in some dogs, but the breed appears to be only minimally affected. Because of the small number of Buhunds bred each year, it will take some time to completely eliminate the problem from the breed. The condition is caused by a recessive gene so no dog can be guaranteed to be free of it. Most Buhunds with cataracts seem to live normal lives without any major problems.

Epilepsy has been noted in the breed, at least when the Buhund first began to be imported to the UK and the U.S. from Norway a few decades ago. It does not occur with greater frequency in Norwegian Buhunds than in other breeds.

Buhunds can be prone to ear and eye infections so this is something to watch for.

In the United States, Norwegian Buhund is estimated to live between 12 and 15 years. A 2004 health survey conducted in the UK found that the median age at death was 12 years/8 months. By far, the leading cause of death was cancer (type unspecified.) Followed by “combinations” like arthritis, incontinence, pneumonia, and/or heart defects combined with old age.

The Norwegian Buhund can usually eat most good quality dog foods, just make sure the food has good nutrition.

Some individual Buhund may have allergies, including food allergies, but it doesn’t appear to be a big problem in the breed. There are different kinds of allergies: inhalant, contact, flea bite, and food, but flea bite and inhalant allergies account for more allergic reactions in dogs than food. If your Buhund seems to be having an allergic reaction, with itching, scratching, redness, etc., it may not be due to the food he’s eating.

If your Norwegian Buhund has problems with diarrhea, vomiting, flatulence, or a gurgly stomach when he eats, this is not a food allergy. It’s a food sensitivity. It’s a good idea to feed your food-sensitive dog a minimal ingredient diet so there’s less chance of giving him something that could upset his gastrointestinal system.

Otherwise, feed your Buhund a good quality diet with good sources of meat protein. It’s easier for a dog to digest good meat protein than protein that comes from poor quality sources that may be found in some cheaper dog foods. Dogs also generally digest animal protein more easily than plant protein.

Keep plenty of fresh water available for your dog at all times. Grain-free foods with high protein percentages can make dogs very thirsty.

Ingredients to Look for (and Avoid)

Norwegian Buhund should be able to eat most good quality dog foods but even dogs in the same breed can have different food needs.

When trying a new food, allow several days to transition to the food, mixing in a little of your dog’s old food each day. If your dog shows signs that he doesn’t like the food or doesn’t tolerate it, make adjustments.

Orijen is consistently rated as one of the best foods around. This is particularly true if you’re looking for a grain-free food with lots of protein. Orijen prides itself on being a “biologically appropriate” food for dogs, meaning that it’s based on what your dog needs as a carnivore. The first five ingredients in this food are all animal proteins: deboned chicken; deboned turkey; yellowtail ﬂounder; whole eggs; whole Atlantic mackerel. The food features 85 percent poultry/fish/eggs and 15 percent fruit, vegetables, and botanicals, with no grains, potatoes, or GMO ingredients. This is a low-carb, low-glycemic food with no protein concentrates. Orijen Original has 38 percent crude protein; 18 percent crude fat; 4 percent crude fiber; and 449 kcal per 8 oz. cup. This is a rich food so you won’t have to feed your Norwegian Buhund very much; it’s a good choice for a very active breed like the Buhund. 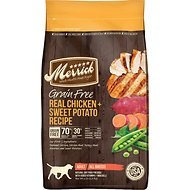 If you like a high protein percentage for your Norwegian Buhund, many dog owners like Merrick Grain-Free foods. The first five ingredients in this food are deboned chicken; chicken meal; turkey meal; sweet potatoes; and potatoes. This recipe is an all life stage food with 460 kcal per cup. It has 70 percent meat ingredients; 30 percent fruits and vegetables; as well as vitamins and minerals. There’s no corn; wheat; soy; or gluten. It has 38 percent crude protein; 17 percent crude fat; and 3.5 percent crude fiber. It also has added glucosamine; chondroitin; and omega-3 and omega-6 fatty acids. This food has good ingredients and quality protein, ideal for a very active Norwegian Buhund. 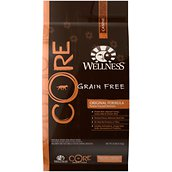 High in protein and calories for active dogs. The first five ingredients are deboned turkey; turkey meal; chicken meal; peas; and potatoes. The food has 34 percent crude protein; 16 percent crude fat; and 421 kcal/cup. It has no meat by-products or filler ingredients, and no artificial preservatives or flavors. It also includes glucosamine and chondroitin for healthy joints; fiber and probiotics for digestive health; omega fatty acids for good skin and coat; high protein for lean body mass and muscle tone; and it’s 100 percent grain-free. This is a gluten-free food with no corn; wheat; or soy. This is a very good maintenance dog food that comes in dry and canned formulas.

If your Norwegian Buhund is very active (training for agility or rally, for example), also recommend Acana foods. Champion Pet Foods has completed their new kitchen in Kentucky and they’ve reformulated some of their dog and cat foods to reflect “regional” ingredients.  The new formula has 33 percent crude protein; 17 percent crude fat; 6 percent crude fiber; 12 percent moisture; and 388 kcal/8 oz. cup. It has 70 percent meat, game, and fish ingredients. The first five ingredients are deboned lamb; deboned duck; whole eggs; lamb meal; and goat meal. If you’re looking for a good grain-free dog food for your Norwegian Buhund that is low in carbohydrates, Acana foods are a good choice.

Norwegian Buhund puppies can usually begin eating a puppy food, or all life stage food, right after they are weaned. Puppy foods should have a calcium to phosphorus ratio of about 1.2 parts calcium to 1 part phosphorus. All life stage foods and most puppy foods are properly formulated so you should not add any extra calcium, such as milk, cheese, or supplements. Doing so can lead to serious health problems such as OCD (osteochondritis dissecans) and other orthopedic problems.

Here are some of the puppy foods we like for Norwegian Buhund puppies. 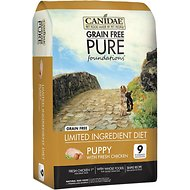 This is one of our favorite foods for all puppies. It’s a limited ingredient food with nine ingredients plus vitamins, minerals, and probiotics. It’s grain-free with antioxidants for a healthy immune system, and omega-3 and -6 to support healthy skin and a beautiful coat. The first five ingredients are chicken; menhaden fish meal; lentils; peas; and potatoes. The recipe is supposed to be especially good for puppies with sensitive digestion. The food has 30 percent crude protein; 12 percent crude fat; 4 percent crude fiber; and 10 percent moisture. This food is high in calories at 520 kcal/cup, but active, growing Buhund puppies can burn them off and you don’t need to feed a lot of food because it’s so nutrient-dense. If your Norwegian Buhund puppy does well on this food, Canidae has some good adult food options.

It’s not unusual for Norwegian Buhund to live into their teen years.  Many older dogs put on pounds as they become less active. For this reason, most “senior” dog foods have fewer calories but they skimp on protein. As long as your older dog doesn’t have problems with his kidneys or with phosphorus, there’s no reason to avoid higher protein levels.

If your dog is doing well on his regular food, keep feeding it, especially if it’s an all life stage food.

If you’re looking for a good quality senior food for your Norwegian Buhund, try one of these: 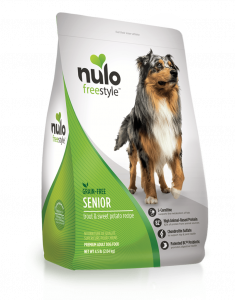 Nulo has only recently become a nationally-known brand so not everyone is familiar with it. Their foods have 80-84 percent animal-based protein, one of the highest amounts of any dog food. Nulo is also one of the few companies using probiotics that seem to actually survive the manufacturing process. (Check their site to read more.) Their foods are low-carb and low-glycemic. They don’t use corn; wheat; soy; potatoes; tapioca; glutens; genetically modified organisms; poultry; eggs; meat by-products; artificial colors; flavors; or preservatives. The food contains glucosamine and chondroitin for joint health. It also has L-Carnitine which aids your senior dog’s metabolism and helps turn fat into muscle. The first five ingredients are deboned trout; turkey meal; salmon meal; yellow peas; and sweet potato. It has 30 percent crude protein; 12 percent crude fat; and 396 kcal/cup. This food is AAFCO-approved for maintenance and is probably one of the best senior dog foods available today.

This food (and several others in this product line) is potato-free with no corn or wheat, easy to digest, and low-glycemic. It contains pumpkin and oatmeal for healthy gut motility. The first five ingredients are grass-fed venison; venison meal; salmon meal; herring meal; and oatmeal. The dry matter basis for this food is an estimated 37.8 percent protein;14.4 percent fat; 3.9 percent fiber; and 35 percent carbs. The calorie count 348 kcal/cup. This food is not specifically made for older dogs but it has the ingredients and percentages that make it a good choice for senior dogs that need to watch their weight.

Some senior dogs have problems eating as they get older, either due to dental problems, or because older dogs start to have weakened senses, including a weaker sense of smell and taste. Make your senior dog’s food more appealing to him by adding tasty toppings or choosing canned dog foods. There are many good canned dog foods that dogs will like. Some of those foods include First Mate/Kasiks (they have some foods they recommend for senior dogs) and Weruva/Dogs in the Kitchen. Read the labels and check the nutrients when choosing a canned dog food because their protein, fat, and nutrients tend to vary from one recipe to another.