Several pet food companies issued recalls in February 2017 due to the potential for “metal contamination” in some of their canned foods. Dog foods recalled included Grreat Choice from PetSmart, Companion Dog Food from Giant food stores, and Blue Buffalo.

PetSmart issued a voluntary recall on February 8 for one production lot of its Grreat Choice Adult Dog Food. This food is sold nationwide in PetSmart’s retail stores, on PetSmart.cm, Pet360.com, and through PetFoodDirect.com. According to a notice on the PetSmart web site, the product was voluntarily recalled as a precautionary measure due to “metal contamination” that could potentially be a choking hazard to pets.

PetSmart initiated the recall after the company received notification from the manufacturer of consumer complaints about the food.

According to various online sources, Grreat Choice canned foods are co-packed for PetSmart by Simmons Global Pet Food. Truthaboutpetfood.com reports that the food may be manufactured in Arkansas, though Simmons has other facilities. Simmons has a good reputation as a manufacturer. They have been making pet foods since the early 1960s and they co-pack for a number of well-known pet food companies, especially canned foods.

The Best By date can be found on the bottom of the can.

No other Grreat Choice products are affected by this problem. PetSmart says that it is not aware of any reported cases of illness or injury related to this product at this time.

If you purchased the recalled food you should stop feeding it to your dog immediately. Return any remaining cans to your local PetSmart store for full refund or exchange.

You can view other varieties of Grreat Choice canned foods on the PetSmart site here.

PetSmart is headquartered in Phoenix, Arizona. The company has 1,352 locations in the U.S., Canada, and Puerto Rico. It is owned by BC Partners in the United Kingdom. They acquired PetSmart for $8.7 billion in 2014.

On the same date as the PetSmart Grreat Choice dog food voluntary recall, Giant Food Stores announced a product recall for some of their canned Companion Dog Foods. This announcement does not appear on the FDA page fore pet food recalls but it can be found on the recall page for Giant Food Stores. According to the company, the foods were recalled because they may contain “foreign material. To date, there have been no complaints associated with the product.”

Customers may return impacted product for a full refund. For additional information call 479-935-6145.

It’s hard not to draw the conclusion that these foods were also made by the same company that made the PetSmart Grreat Choice canned foods which had the problems with metal contamination.

Blue Buffalo also had a voluntary canned dog food recall in early February because of concerns over metal contamination. This recall does not appear on the FDA page for pet food recalls, though a later Blue Buffalo recall does appear.

According to Blue Buffalo, no other Blue Buffalo products are involved, and they have not received any reports of illness or injury as a result of the problems giving rise to this recall.

If you have a can of this product you can return it for a full refund at your local retailer. For more information, please call Blue Buffalo at 866-800-2917. 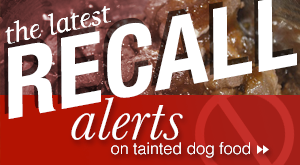 On occasion, our suggestions for high-quality pet foods will direct you to our partner site(s), where we may earn a small commission, which financially supports further development of Dog Food Guru.

In order to provide you the most appropriate and trust-worthy recommendations, we base our endorsements solely on the quality of the foods as they relate to the breeds, life-stages, and formulas introduced in each article.

We appreciate your support and confidence in our ratings and reviews, and welcome feedback via our comment section or contact form that may help shed light on other quality foods.